Organic semiconductors consist of small molecules and polymers containing π−conjugated functional groups that allow for de-localization and transport of electrons in crystals or thin films. While showing generally poorer conductivity than inorganic semiconductors, e.g. silicon, organic semiconductors can be used in low-temperature fabrication processes. This makes them ideal for use in large-area electronics applications, such as in displays and sensors, and for use in electronics on unconventional substrates, such as plastic foils and paper. An essential way of evaluating the charge-carrier transport of these materials is to implement them as the active layer in field-effect transistors. In this lab course, the students will fabricate organic thin-film transistors (TFTs) using thermal evaporation/sublimation. The students will then analyze the thin-film morphology of the organic semiconductor films using optical microscopy and the charge transport by measuring and analyzing the electrical performance of the transistors. 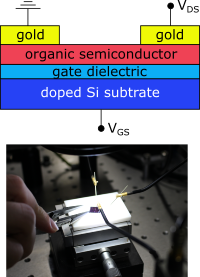